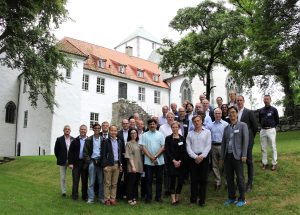 Every year, 15 million people throughout the world suffer a stroke*. Out of this number five million die and another five million are left permanently disabled with considerable personal impact on daily life and placing a burden on family and community. Stroke is the second leading cause of death above the age of 60 years and the fifth leading cause for people aged 15 to 59 years.

The First Utstein Meeting on Emergency Stroke Care
In June 2018, thirty designated international experts gathered at the Utstein Abbey in Norway for a two-day meeting. In the unique surroundings of Norway’s best-preserved monastery from the late 1200s the experts addressed the challenge of how to improve Emergency Stroke Care.

Even though a positive development has already started, there is a need for establishing a consensus on implementation of best practices in stroke care.

Scientific Paper and Extended Report
The neurologists and EMS experts are now working to publish a scientific paper with outputs from the meeting as well as an extended report including case descriptions of best practice from throughout the world.

Watch a short movie from the meeting, where the experts Freddy Lippert, Anthony Rudd and Marcus Ong tell about the work with global Emergency Stroke Care.

The Utstein Method
The Utstein method has been developed during the last 20 years in the field of Cardiac Arrest as a process of standardising and reporting research in Out-of-Hospital Cardiac Arrest and defining the essential elements of e.g. a cardiac arrest registry.

The Utstein process has improved resuscitation globally and the continued efforts of many researchers, scientist, and EMS directors is dedicated to advancing resuscitation science and practice.

*According to the World Health Organization (WHO).